The generous support of the Southeast Section of the American Urological Association made it possible for Dr. Elizabeth Traore to serve as an IVU Resident Scholar in Dakar, Senegal under the mentorship of Dr. Susan Kalota.

“I had been dreaming of joining an IVU trip since I heard of the organization’s existence when I was still a medical student. I was overjoyed when I was given the opportunity to travel to Dakar, Senegal with IVU as a resident scholar, thanks to funding from the Southeast Section of the American Urologic Association.  My trip was focused on female urologic care, and my team was composed of myself and three practicing physicians (Dr. Susan Kalota, Dr. Lindsey Kerr, and Dr. Greg Owens), all of whom had prior experience with surgical work in the developing world. 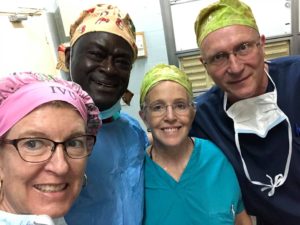 “We spent the week working at the Hôpital Général Idrissa Pouye, which is a large public hospital in the center of Dakar. Over the course of the week we met several faculty members with whom we collaborated very closely as well as the Urology residents training there who were from a diverse range of countries in West Africa as well as the Middle East. Our first day was spent seeing patients in clinic that had been pre-selected as potential surgical candidates. As a team, together with the host physicians, we saw patients, took their histories, and examined them.  There was a lot of learning in just this one clinic day, discussing the important aspects of workup, correct exam technique, and choosing the appropriate surgery in each case or rather to defer surgery. The following days were spent operating in two neighboring ORs on the women we had selected.  Charts were composed of brief handwritten notes. In the absence of the endless bureaucracy and documentation required in the US, I felt like we could focus on patient care more easily. Cases were mostly fistula repairs, prolapse repairs, and incontinence surgery, including sling placement. I spent a significant amount of time working with and learning from their fistula expert, who was frequently repairing large obstetric fistulas, including ones that had failed prior repairs, something we do not see often in the United States.  Residents traded off scrubbing in and observing, and despite a significant language barrier, they were welcoming and eager to learn. Our last day was spent giving lectures and talking about what had gone well and what could be improved on going forward.

“I was not expecting what an amazing experience it would be to practice surgery, something I had only known at my home residency program, in such a different setting in collaboration with physicians from such varied backgrounds. I loved seeing how, as a team, we worked through problems, often debating different but equally valid solutions and highlighting certain doctors’ strengths. It was at once inspiring and humbling to see the care the department was trying to provide to patients with such limited resources. Unfortunately, so many diagnostics and treatments in Urology, for example urodynamics or lithotripsy, depend on specific equipment and technology, and in several cases, although the hospital possessed the equipment, it was not able to be maintained and sat unused, leaving patients out of luck. More than anything, the week was a very unifying experience and left me with the feeling that, no matter our situation or background, we were all fighting the same battle, trying to do the best for our patients.

“In our free time we explored the city. I previously served as a Peace Corps volunteer in another West African country and the familiar scenes of 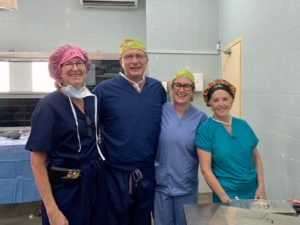 vibrant, bustling Dakar made me feel warmly nostalgic. West African cities saturate all the senses. The Senegalese women filled the streets wearing gorgeously embroidered, brightly colorful outfits that the country is well known for. We were lodging just a stone’s throw from the waterfront where there was a large fish market selling the day’s catch surrounded by dozens of intricately painted fishing pirogues hauled up on the beach that are iconic in Dakar. In the evenings, the air was full of the smell of freshly fried fish and the meals street sellers were serving up to hungry customers.  Between the streets packed with honking taxis, sellers inviting you to see their goods and buyers haggling prices, the markets can be a cacophony. Further down the beach to the north, there were dozens of manually powered exercise equipment machines adjacent to the local university that stood unoccupied all day until the evenings when students would flood the area to work out.  Needless to say, the week flew by.

“I am so grateful to IVU, the American and Senegalese physicians with whom I collaborated, and the Southeast Section of the AUA for this unforgettable experience.  I strongly support the model of sustainable development IVU is championing, focused on teaching to grow capacity. I hope this is just my first of many trips working with IVU in the future.”