The Southeastern Section of the American Urological Association made it possible for Dr. Charlotte Wu to serve as an IVU Resident Scholar in Dakar, Senegal under the mentorship of Drs. Christina Ching and Heidi Stephany. 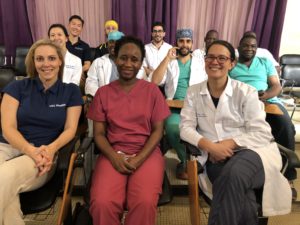 “We arrived on Saturday evening and met with our hosts on Sunday at Hôpital Général Idrissa Pouye (“HOGGY” for its former name Hôpital Général de Grand Yoff). Dr. Madina Ndoye from the local urology team and her resident Dr. Ayun Cassell along with their team of nurses had pre-selected patients for us to see in clinic. Among those seen, only half were surgical candidates with the others being too sick or too young for surgery. We booked predominantly reconstructive cases (hypospadias, DSD, trauma), some for diagnosis and others for definitive treatment. 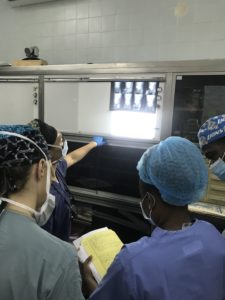 “During the week, we had two ORs in adjacent rooms and our IVU team (Dr. Heidi Stephany, Dr. Christina Ching, PGY4 resident Dr. Justin La, and myself) was divided 2 per room. The Senegalese urologists and urology residents started out as first or second assist to Dr. Stephany and Dr. Ching early in the week, and later we switched roles with the Senegalese urologists becoming primary surgeon and taking us through the surgeries. Since HOGGY is a major teaching hospital in West Africa, there were medical students and residents from neighboring countries rotating through. Our ORs were often attended by 10-12 trainees speaking French, Wolof, Arabic, and English, with all of us helping to translate between the languages. Since we all took turns as scrub tech, French would often become the default for efficiency– “ciseaux”, “pince”, “sérum salé”, and “compresse” became part of our daily vocabulary. A midday break with lunch was the norm, and they treated us to catered local dishes including the favorites “Thieboudienne”, a plate of fish and rice in a tomato sauce, and “Yassa Poulet”, a chicken dish with onion. 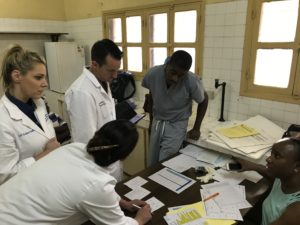 “IVU trips are truly surgery in its purest form. As a participant, your framework is shifted, your perspectives are re-calibrated, and you’re reminded of what a surgeon’s life would be without hospital bureaucracy. The days were long but moved quickly with no delays for mundane documentation, for server outages, or for lack of available staff. It was an unmatched experience being able to focus only on the important things. This experience was also a reminder of all that we take for granted in the US, including access to advanced diagnostic imaging, extra-fine instruments and sutures, expensive loupes, and to a seemingly endless supply of top-quality disposables. We were forced to reflect on what contributes meaningfully to patient care versus what may simply add to unnecessary medical cost and waste, which are too often overlooked in the US. Overall, I have come away from this very positive experience with new colleagues, mentors, and friends. Drs. Stephany and Ching are exceptional team leaders, who I can only hope to work with again. I am grateful to the SESAUA and IVU for the experience!”