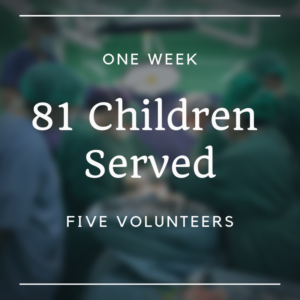 The IVUmed team served children suffering from pediatric urological conditions while training local doctors and nurses. During the workshop, the team served 81 children with complex conditions. They performed 30 surgeries on 26 patients.

Dr. Angel reported that the site was incredibly organized and that the workshop ran like clockwork. The staff was eager to learn and collaborate. He related that there are only six pediatric urologists in Mongolia, which has a population of 3 million people, demonstrating a need for these workshops. Dr. Angel noted that this site has a lot of potential and recommends that IVUmed lead two workshops at this facility per year going forward.

Dr. Arlen echoed Dr. Angel’s positive impression of the site. In addition to recommending two IVUmed workshops per year, Dr. Arlen wishes to return as a member of one of those teams. She said the site is ready to take off and eager for IVUmed’s support.

Dr. Scott Stenquist reported that the local staff was very engaged in the workshop. He commented that the facility was very nice and that there was “excellent local anesthesia staff.” He noted that “the Urology Chairman [is] very committed to improving urologic care in his hospital.”

Dr. Lovin assisted the team as an IVUmed Resident Scholar and thought the experience was very rewarding. She returned home saying that she felt like she had gotten more out of the trip than she gave. She added, “I am very fortunate to have been given the opportunity to volunteer with IVUmed in Mongolia.” She reported, “I could not have asked for a better group of people to complete a mission with! Carlos was an excellent leader. Angela, Scott, and Laurie were all very engaged and eager to learn. The Mongolian urologists went out of their way to make sure we were well taken care of, and the patients and families were so grateful for the work that we did. At the end of the workshop, all of the patients pooled their funds and gave us each a cashmere scarf and an authentic Mongolian game. It was so special to be able to help these children and families.”