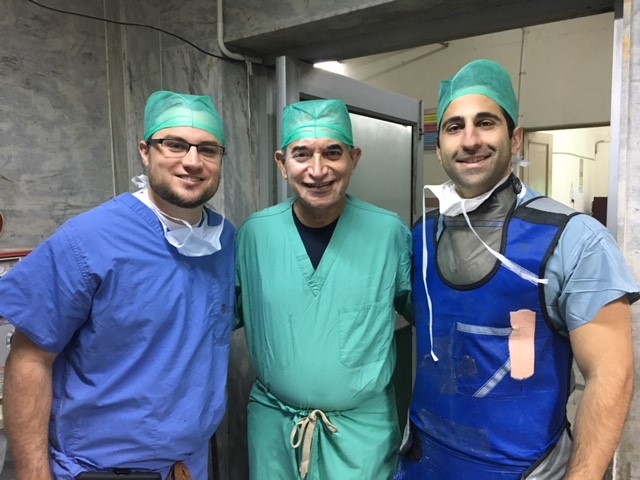 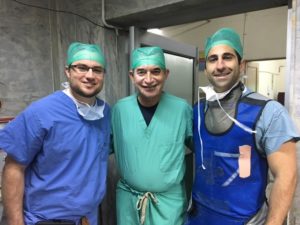 “Crowds of patients filled the streets outside of the hospital with their family members and medical records clasped tightly to their bodies. As soon as they made eye contact with our team, their looks of despair became replaced with a namaskar, a traditional Indian greeting of admiration. As I peered at the week’s case list, I saw that we had a wide variety of operations ahead of us: DVIUs, TURPs, TURBTs, Ureteroscopies, PCNLs, retropubic slings, cystolithotomies, orchidopexies and more. 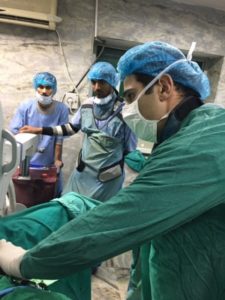 One of the most impressive things for me during the urology camp was how fast the operating room turnaround time was. Within seconds, patients were taken off of the table and transported to post op while another patient was loaded onto the OR table. Within seconds, spinal anesthesia was established and the next case was started. Besides the rapidity of the cases, I was amazed at how so much could be done with such minimal material. Surgical instruments and drapes would be rewashed and reused in between cases. None of the material was wasted which allowed for rapid turnaround.

One of the most memorable cases that I was involved with was a TURP that was not going well. The resection was extremely bloody and we were not making any headway. All of a sudden, we converted the case to an open simple prostatectomy. The patient’s position was changed and we immediately made our suprapubic incision to get to the prostate. Within minutes, we delivered the bloody prostate and started obtaining hemostasis. It was amazing how with such rapidity, hemostasis was obtained. I was impressed that with such few resources, so much was accomplished at this camp.

I am beyond thankful to IVUmed for giving me the opportunity to make changes to the lives of so many people. It was a life-changing experience for me to be able to work with such esteemed urologists: Dr. Gopal Badlani, Dr. Rohit Ajmera, Dr. Sunil Gokhu and more. I am also thankful for the support of my mentors at Kaiser Los Angeles, including Drs. Gary Chien and Polina Reyblat. Without their support and leadership, I would have never been able to have such a remarkable experience providing care to patients in India.”

“A passing boat leaves no trace upon the waters” was one of many dictums that Dr. Gopal Badlani was taught by his mentor, Sant Hirdaram Sahib.  While visiting his memorial in Pushkar, Dr. Badlani explained the old adage was meant to teach humility; to learn not take yourself too seriously. The mental image of an ocean vessel creating a large wake and then completely disappearing after only a few seconds kept recurring in my head throughout my trip to India.  Something bothered me with this reasoning.  It is the antithesis to the “butterfly effect”—where even small changes can have long lasting effects.  Why did it bother me?  Because what I was seeing during my IVUmed experience in Ajmer was the exact opposite.

Dr. Badlani and his team had been coming to Ajmer and other cities for the past few decades conducting free urology camps for patients who could not afford surgery.  Complicated cases were saved for these camps so a team of physicians could brainstorm treatment plans.  Urologists from surrounding areas came to learn new techniques and help tackle the large volume of patients needing surgery.

I arrived at the hospital a day before Dr. Badlani and was shown a quick tour.  I noticed a small poster written in English advertising our free urology camp and wondered how many people would actually show up.  The following day my question was answered as we were greeted by dozens of patients and their families eagerly waiting to see the urology team.  Dr. Badlani arrived with style—flanked by local volunteers, politicians, spiritual leaders, administrators, and yes, a press corps.  Apparently, the tiny ripple he created years ago didn’t go unnoticed.  His volunteer spirit was contagious.  We had tremendous support from local business leaders, cooks, hotel staff, scrub techs, nurses, surgical residents, and anesthesia.

Over the next five days, we performed over a hundred surgeries including many TURPS, PCNLs, slings, and DVIUs.  Additional surgeries less often seen in the US included open simple prostatectomies, vesicovaginal fistula repairs, and open cystolithotomies.  One of the first things I noticed was the different equipment in the operating room.  It wasn’t just adjusting to Storz vs Olympus products; it was using technology and equipment that I had never seen and frankly never knew existed.  Everything was reusable and designed to be done as affordable as possible.

The turnover time between cases was record setting.  As soon as one patient was waking up, the next one was already walking in taking his place.  The team of orderlies and circulators was on point rapidly scrubbing down the room and prepping the next patient.  The sequence of cases was planned with laterality in mind to avoid having to move around beds, C-arms, and monitors. 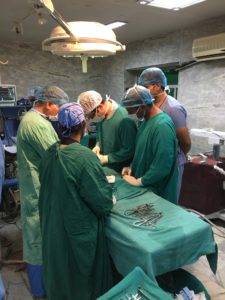 Post-operative patients soon overran the small hospital taking up even the hallways for makeshift space.  Rooms were filled wall to wall with beds with only enough space for one person to walk between.  Catheter management and irrigation was taught to family members to assist the outnumbered floor nurses and residents.  Unlike in the United States, patients were not given narcotics following surgery.  Scheduled acetaminophen and ibuprofen were all the patients needed on the floor.  The opioid epidemic stemming from unused prescriptions has not affected India.

While some of the community urologists were learning from Dr. Badlani, others were there to teach us and the general surgery residents.  I was amazed at how facile they were with getting access on their PCNLs.  I asked how many they had done thinking it had to be at least a hundred.  I was shocked when he told me he had done over ten thousand.  In a country of over 1.3 billion people, surgical volume is not a problem.

Although our operative week was extremely productive, it was just a drop in the bucket compared to the millions of people world-wide that need urologic surgery.  “Teach one, reach many” is the mission statement of IVUmed.  While the wave Dr Badlani started in Ajmer years ago is still growing, there is another wave not as often spoken about.  He has taken dozens of residents with him to India through the years.  We have returned to our home institutions and disseminated our experience from sharing various surgical techniques to gushing about the joy of service.  While a boat may leave no trace upon the water, I discovered how much of an impact we as urologists can have on the most destitute and desperate people and the powerful and enduring impact they leave on us.”