Sponsored by:  North Central Section of the AUA 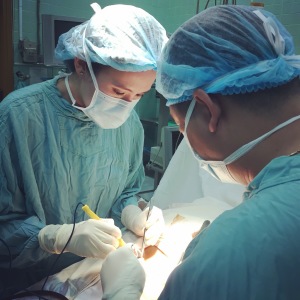 Hue is a city in central Vietnam on the banks of the Perfume River, where I was fortunate to be able to spend a week working alongside local urologists.  While in Hue, I had the opportunity to observe and participate in the delivery of urologic care, from didactic instruction in conferences to teaching at the bedside and in the clinic to involvement in the operating room in a variety of surgical procedures.

Through my wide range of experiences, I was able to appreciate both the similarities and differences in urologic practice and training in comparing Vietnam and the United States.  Fundamentally, in both settings, the focus is on evaluating and managing medical and surgical diseases of the male and female urinary tract systems and male genital system.  Basic surgical principles and techniques, too, transcend geographic borders.

The burden of disease as well as the access to and delivery of health care, however, differ vastly between countries.  With regard to urologic disease burden, the diversity of cases I saw in Vietnam was very different from that which I have become accustomed to in the United States.  A large majority of the operative cases for stone disease, for example, were performed using open or percutaneous techniques (as opposed to endoscopic management), a testament to both the differences in presentation of disease as well as in the readily available technology and skills in Hue.

The striking difference in disease presentation was apparent not only in cases of benign urologic conditions, such as the finding of a four centimeter ureteral calculus, but also in cases of malignancy.  In making rounds with the local urologists on inpatients in Hue Central Hospital, I met a woman with advanced bladder cancer whose initial presentation was with gross hematuria, anemia, renal failure, and bilateral hydronephrosis.  She and her family had traveled quite a distance from a more rural area to seek care in Hue after the agriculture season (the family’s livelihood) was complete. 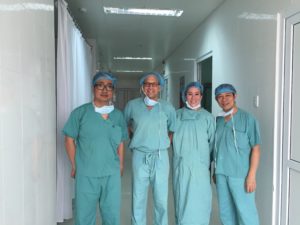 Such a presentation is not an uncommon one to encounter in Hue.  As one of the local urologists explained, in Hue, as well as in Vietnam in general, patients often present with later stages of disease, as limited resources, including time, money, and transportation, often contribute to delays in patients seeking necessary medical care.  Many people must often continue to work and defer medical care in order to support their families, sometimes at the expense of their own health.

The urologists in Hue are well-trained, and in a city of about 350,000 people, there are 12-15 urologists who practice in three hospitals and numerous clinics throughout the city.  Training is different from that in the United States, with medical school graduates paying to participate in residency programs.  Urology residency, like other specialties, is three years in duration, and in early post-residency careers, one sees young urologists practicing and operating alongside more senior urologists.

Urologists in Hue face unique challenges in working in a resource limited setting.  While in Hue, I had the opportunity to observe and/or participate in 11 cases, ranging from ureteroscopy to open ureterolithotomies to an open radical cystoprostatectomy with ileal neobladder.  There were notable differences in accessible equipment.  In the operating room, for example, there were limited instruments available, and fluoroscopy, too, was not always readily available or reliable.  In addition, certain disposable items were often sterilized and re-utilized out of necessity.  Different surgical skill sets were also apparent.  While open stone surgery was commonly performed, flexible ureteroscopy is far less often performed, and urologists cite lack of equipment and training as reasons for this disparity.

Despite the material, financial, training, and infrastructure challenges faced by urologists in Hue, the practice of urology is well-adapted to the environment.  The capacity for fundamental urologic interventions exists, and while technology is not as advanced as it may be elsewhere, the surgeons have excellent technical skills, and though resources are limited, the urologists are very resourceful.

It was a privilege to have the opportunity to work alongside the urologists in Hue and participate in the delivery of urologic care.  I was able to view urology through a new lens, and through this experience, I gained practical experience in a new environment.  To see another country and its people and to begin to understand not only a different healthcare system and its challenges, but also a different culture, has afforded me a unique perspective.   I have made new connections with colleagues that will hopefully prove to be long-standing relationships, as I incorporate global health practice into my urology career.