Dr. James Tan’s IVUmed scholarship experience in Dakar, Senegal was made possible by the generous support of the South Central Section of the AUA. During his time in Senegal, Dr. Tan was accompanied by mentor, Francis Schneck, MD.

Dr. Tan, reflecting on his experience, reported, “We quickly got through our intake of 30 plus patients with efficiency despite some of us still recovering from severe jet lag.  Amongst these we chose the most appropriate cases to proceed with and scheduled them appropriately on each of the operative days.  Despite the facilities being much different from what we were used to we were quick to unpack and start cases the following day.  It was clear from the get go that the aim of our time would be focused on training the local doctors new techniques and procedures.  There was a willingness to allow the local surgeons to have as much hands on time and struggles as possible much like during our residency training.  This would not be a time of pure observation.  They would get valuable experience with cases they’d never seen before.  Each day was long and tiring but at the end of the day there was a satisfaction I had in working with a great group of people as a team helping the kids we operated on.

My goal as I progress in my career is to eventually do continuous short-term mission trips.  I made many valuable observations.  Organization was key as we had a set schedule from the minute we landed.  This demands an established relationship with the local people and doctors that can only be developed through years of working together much like Dr. Schneck had with the Grand Yoff hospital.  As I learned, two of the local urologists had spent time in the U.S. and had visited Dr. Schneck and Tina the nurse who traveled with us.  An additional element of a successful trip was the need to teach your skills to as many as possible.  As the old saying goes give a man a fish and he eats for a day, teach a man to fish and he eats for a lifetime.  The same can be said for doctors.  The most helpful thing for the local people besides sending more doctors is to teach the doctors already there new skills and techniques so that they may reach as many people as possible even when the team leaves.” 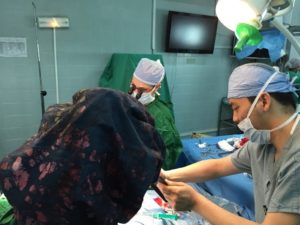