Dr. Liam Macleod’s IVUmed scholarship experience in Mozambique was made possible by the generous support of Verathon.   During his time there, Dr. Macleod was accompanied by mentor, Ryan Terlecki, MD.  The visit occurred in parallel with a conference arranged for African urologists including several well-known surgeons and other urologists from Nigeria, Zimbabwe, Guinea-Bissau, Kenya, Niger, Liberia, Angola and local urology and general surgery residents. 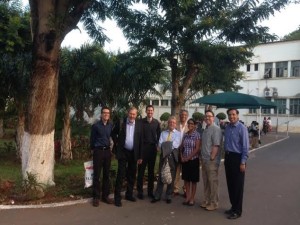 Upon arrival in Mozambique Dr. Macleod was able to quickly scrub in to assist with surgeries.  He noted, “Needless to say, the OR was very crowded with observers when I arrived.  Nonetheless Dr. Terlecki invited me to scrub in immediately.”

He observed, “There were numerous cases of urethral strictures, urethral distraction injuries, obstetric fistulas and congenital anomalies.  The northern part of the country is less developed and the roads are typically small and narrow.  Thus, when patients come to Maputo (or an urban center) for care it requires a long and arduous journey often taking several days.  The result is that many patients reside in the ward for an extended time while awaiting surgery.  We met one young lady that had been living there for a year (during which time she had undergone a fistula repair and two revisions but was awaiting a final repair). 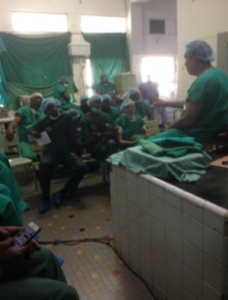 Of all the components of the trip—operating, caring for patients, seeing the way wards, hospitals and operating rooms are run in another country, listening to talks and participating in discussions—I think that the newly formed relationships will have the most lasting impression.  I have remained in touch via email with a number of people since being back in the U.S.  I am hopeful that these relationships will serve as a conduit for future trips and a mechanism to divert resources for improving urological care into capable hands.”